These are the two questions in which I would sum up Alain de Botton’s riveting book.  He’d probably shoot me for saying it.  But let me explain.

This book is a treat.  With art and culture scattered throughout the book, Alain finds some obscure tour guides of past culture and history to introduce us to aspects of travel.  When he’s not doing this, he’s inserting tales of his own, but never in a way that leaves you feeling like that awkward person at the party who has to listen to everyone never shutting up about their travels to far flung lands.  His use of the English language, his way of portraying even bland scenes, and his command of imagery is stunning, and is worth the read even for that.

But like all post-modern writers, they strike a grave difficulty as they attempt to lead you on a joyful, purposeless wander through (in this case) travel.  Because at some point, free-ing as it seems to be offered unfettered, chaotic travel, a big, bad “BUT” comes in.

In this case with Alain, his BUT is an understanding that we can live in chaos.  He gets to a third of the way through a book with random tales, but then he insists on preaching his ordered, secular message to us through the words of another, that “any attempts to create order imply a censorious and prudish denial of our condition” (p. 783 Kindle).  In other words, “if you try to tell me how to travel and insert some order into travel, you can get lost, because that’s not how we are” [or how I want to be].  I mean it’s a nuanced attempt (and far more nuanced than some art that derides a word-centred worldview and then has to describe what the art means, in words) to tell us that we don’t live in an ordered world…..with ordered words, in a book that doubtless has order and intentionality.

And with this, he fails to convince me on the first question, that the secular worldview can give us unfettered freedom to travel with no order or law to how you go about it.  Apart from his secular law which he’ll now proclaim.

However to the second question, he gives a far more interesting answer that no matter what worldview you adhere to, you would do well to listen.  He never says it outright, but he insinuates that we’ll never be able to remain chasing big travel moments and be happy.  The reality lies beyond the travel brochure pictures which painted for us the idyllic, and set our expectations so high that we couldn’t help but be disappointed.

And in realising things like this, De Botton concludes that happiness is primarily psychological, not material (p. 273 Kindle).  Happiness cannot be decided by how many places we visit, or the state of the places we find (for we would always fall short or be disappointed).  So happiness must involve expectations and imagination and being content like the Stoics.  The traveller is not merely chasing the present experience, but potentially also the memory and the dream, and being content in the present (where we are, what we have deemed ourselves to be).  In his documentary, he goes nearly further into Eastern thought, and suggests that we should try to lose ourselves and our feelings, in order to gain happiness.

But another sad thing for the stoic, is that he deems that he’s unable to change messy reality, and therefore, he must create a new one (p. 926 Kindle).  He thinks that this is free-ing because it doesn’t nail his colours to one thing, and leave him standing against others.  For example, in creating his identity as a Chinese-Arab person, he doesn’t force himself to forever be either one, and against the other (p. 941 Kindle).  But surely this is a false dichotomy?  What if the Christian traveller could be fully Chinese (what he truly was born), yet delight in all nations, and have a passion for all peoples?  He could learn from all cultures, all genders, all occupations, all languages, and yet realise he is a limited creature, and cannot delude himself into thinking he will be all things to all men perfectly.  Surely in realising his limitations, it would free him to enjoy adventuring to expand his horizons?

In several brief and borrowed moments of sanity, the author (through Nietzsche) borrows from Christian belief, in seeing that what you believe changes how you act, and therefore changes stuff (p. 1059 Kindle).  Or so it should.  It shouldn’t remain a dry construct on a page.  Other things follow on, that the majesty of nature brings out good in us (p. 1447) and that it makes us feel small (p. 1552).  The the sublime is really sublime in the world, because we feel weak (p. 1562).  Turning Pascal around (p.1904 Kindle), he instead says that in painting an image, we point to something we can create, more beautiful than the original, perhaps.  But Pascal’s point was that we point to a creator, in the things we paint.  They are mere shadows, not because we could imagine better, but because there is better, in another place – a new Heavens and a new Earth.  And so it’s on those dispersed notes that I finish. 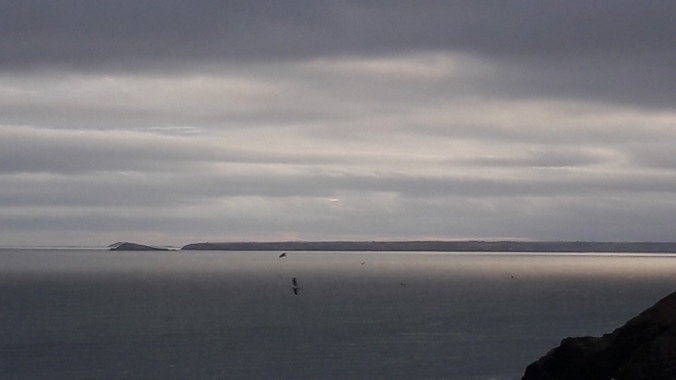 Can the secular worldview give unfettered freedom to travel the world?

Well, not while it continues to be a preached, wordy message, telling us exclusively what to think about reality.  That’s no more freeing than the Christian exclusive message.

Can such a secular worldview free us from being controlled by such desires from travel, to enjoy the small things in life?

I’d argue not as well as the Christian message could, that has our identity firmly in other places (in Christ) and frees us to enjoy the world under His Lordship without being controlled by it.  For His yoke is a light one, and His New Creation a million more times stunning than the beautiful ruin we stand in front of now.  And in the meantime, He enables us to engage the messiness straight on, and not have to re-create ourselves to try and avoid it.

Will you buy the secular vision of travel?  It promises so much.  But will it live up to its calling?  Or will it be vanity – mere soapy bubbles.  All talk but no substance.