I’ve tried to write this several times closer to the conversations I had with these two ladies, but each time I clammed up and tears were welling in my eyes.  And if it’s been like that for me, I don’t know what it is like for these ladies.

With that in mind, I know how tempting it would be to agree with many of those I met on Saturday at the “March for Repeal” (to repeal the 8th amendment, which bans abortion in most circumstances in Ireland, outside of when the mother’s life is endangered) who asked me why I was vocalising my male views, on a female topic.  And if it were simply that, perhaps both “sides” of the protest could tell their male attendees to go home and shut up.

It wasn’t easy to stay.  I’d had a long week of work, the sun was out for the first time this summer (in any meaningful way), and there were plenty of places I would rather have been that standing in a 200 strong crowd of angry, yelling protesters, who were chanting things from the depths of their being against what I considered precious to me.  Compared to those who had come down to protest for Repeal from Limerick as they thought this would be a “fun day out”, I was out of my mind.

And it’s not because I’m “one of those” people either.  You know the ones who love to get their megaphone out and make their understanding of truth be known to everyone, at any opportunity?  I was helping a UCC society new committee this week do some teamwork training, and to help them understand their roles within a team.  And from the survey they all filled in (Belbin), I didn’t score highly on any of the assertive questions about making my views known in a divergent group.  Perhaps I’m blind to my own ways.

What was I doing there?  Displaying signs like these, and saying very little:

The group I was with that day also endorse the use of graphic imagery to inform people, as they would believe that statistics don’t hit home “the nature of genocide”.  But before you voice your disgust, I wonder if you could give me a few seconds more and listen in to one of many conversations I had that day with “Eilidh”?

Firstly I should say that we were their legally, having forewarned the Gards about our being there, and using EU legislation to allow us to express what we wished.  We have a code with all those who work with us, that we’re there to stand silently and engage with those who wish to engage in meaningful ways and seek to love those around us, however we can.  “Eilidh” was one of those.

“Excuse me, I was just wondering if you know that women are protected under Irish law in all circumstances and can have a termination of pregnancy if their life is at risk?”

“That’s a lie.  What happened to Savita, or that lady flung in a mental home for wanting an abortion this last week?”

“Savita was medical malpractice (nothing to do with abortion) and the most recent case of the lady going into care was not because she wanted an abortion.  It was standard medical procedure, and she also happened to be pregnant at the time.”

E angrily, “Why are you even here?  Just to show hatred for women?”

“No, I’m just wanting to speak up for those who can’t speak for themselves, like these ones” (pointing to large picture of aborted fetuses)

“But they’re all fake images.  Fake news.  Aborted fetuses aren’t like that.”

I nod, but barely a second passes as she gulps and interrupts.

“But I bet you don’t care for women who choose to keep a child.  What do you know about anything like that?  You just campaign for something and then leave women to suffer.”

“Well, no, actually.  I campaign for something and then try to live sacrificially towards it.  I run community spaces in the city to help a diverse range of people, and am involved with others who give financially, give accommodation, give of their time, and surround women who want to keep their children with a loving community of supportive people.  In fact, we even support those who’ve had abortions, to mentally process things.”

“Oh…..that’s beautiful.  Well, I wish that had been made known to me when I was 16 and was forced by my family to go for an abortion”, she said, breaking down in front of me.

Then she turned away, ashamed of her tears, back to the yelling crowd, full of fear.

I once again returned to silence, pondering just how many others like her were in the crowd.  Another I chatted to that day was angry, simply because she had come back from an abortion a few hours earlier, and needed somewhere to vent.

People’s experiences can change them.  Change us for the good, but also change us for the worse.  It can blind us all to logic.  And logic in the light of experience can seem so cold, so brutal.  Unless you have a warm community around you, taking away any shame and willing to unconditionally support you.  I’ve linked some places you can go if you want to experience that.

I hope the table below makes it clear that there aren’t any reasons to endorse abortion, unless you are also willing for infanticide in the same cases, as pro-choice ethicist Peter Singer so rightly has argued. 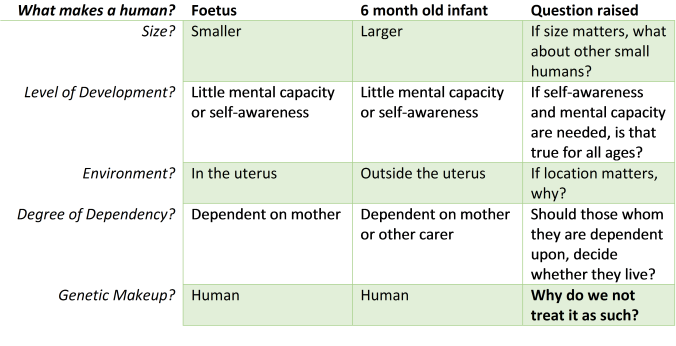 Well they are hard.  And they’ll never become anything but that.  They are also rare.  But so this doesn’t get any longer, perhaps I could point you to find answers here and here, and further support below:

women recently who travelled to the UK to have an abortion, in the light of Ireland’s quite conservative legislation which means abortion is illegal under most circumstances, apart from when the mother’s life is at risk.

Whether the eighth amendment of the Irish constitution (which states the rights of the unborn) should be repealed is and will be the issue of the coming year.  Finally some of the law experts are speaking out about whether repealing the eighth would result in abortion on demand, or whether it would likely just allow for abortion in the case of fatal foetal abnormality and rape.  That is simply one of the questions – what would replace it, if anything?

what would replace [the 8th amendment], if anything?

Other questions that strike me as wise in asking, regardless of what side you stand on, or what your experiences have been in life are:

I’ll be looking at some of these topics as the weeks go on and as the university campuses I work on, hopefully allow for there to be diversity of opinion on this topic and allow everyone to express some opinions on this.

Tonight, it was a great presentation from UCC final year medic, Lucy Vernon on the topic, with a super chance for discussion throughout.

Thankfully for now, in my opinion, the journey to the UK that virtually anyone could afford, is enough of a deterrent to make people think more logically about their ethics.