“Are you serious? But what if you get robbed?”

“Let’s just change the topic. We disagree, and you’re not going to change your mind, so let’s talk about something else.”

These are just a few examples of the kinds of responses I get from well-meaning friends and family before I embark on any kind of adventure, be it up the country, or at the other side of the world – especially when I go solo.

Because I am a woman, I cannot be afforded the same luxuries and privileges as a man can.

Or at least that’s what the world tries to tell me. Society tells us that sure, you can get a good job, vote, make your own decisions, but please, do not try to travel on your own for more than a day. You never know, you might sprain your ankle or get shot or something. The Bible, I have found, says something a little different.

When I was 18, I went on my first 100% solo adventure. No friends or family to pick me up at the airport, in fact no flights at all this time, and no friends or family at the destination either (wherever that would be). Fast forward to today, tell me I’m not [insert adjective here] enough to do something, and you can bet I’ll be doing just that the next time we meet. 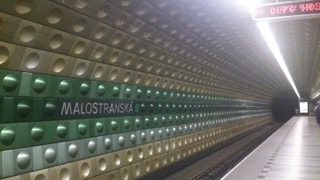 Where to next?
(Prague metro station deco is often worth a look!)

A 5000(ish) person festival in Germany, followed by an impromptu adventure exploring bits of France, Germany and the Czech Republic. The plan was just that: elusive and undefined. I vaguely planned the towns I more or less wanted to see, but even this “plan” was fluid enough to change about 3 times. Coming from a family where my mother had always seen to every last detail before we ever set foot in the car (and this does have it’s advantages, as I would soon learn), I wanted to break the mould a little. This kind of improvised travel was very new to me, which explained it’s very appeal in the first place.

So that’s a little bit about how I got to where I am now, not literally, but you get the idea. Right now, literally, it’s 21:40, and I’m sitting in what I understand to be a Spanish equivalent of Starbucks. It’s quite nice, but I just ran out of wifi and the AC is getting a little chilly for my taste; I actually prefer a thin, permanent layer of sweat and pollution to cover my skin while in Barcelona (be sure to pronounce that “c” correctly for full effect). 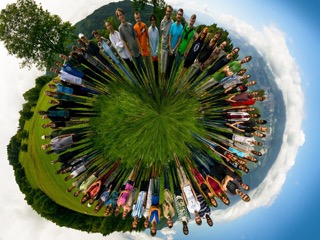 Where’s Wally? Some of the people I met at the beginning of that adventure during the summer of 2015; who encouraged me to pursue my travels in light of the theology we had studied together that week:

This time, I’m not travelling solo as I often would (apart from a couple of hours of airport travels), but have decided to embark upon a shorter, more planned adventure with my lovely, albeit very orthodox, grandmother. She’s an early riser and likes to tell me when to go to bed. I like to defy her well-meaning orders just as much as she likes to give them.

Over the next while, I’d like to explore a little more one side of the theology of travel that Peter cannot: the theology of female, Christian travel, in various contexts:

Oops, my grandmother is telling me to go to bed; so I guess 4 posts is all you’ll get!

Marie-Louise practices as a nurse here in Cork, Ireland, and can be found in her free time volunteering at Cork International Student Cafe, crossing cultures, and helping people think through their environmental impact on the world.  She is strangely not visible online (and so I can say what I wish here).