“The world is a book, and those who do not travel read only a page.”

There’s rarely a more quoted saying online about travel than the one above.  But something about it made me question its authorial integrity.  I’ve read Augustine (albeit not all of him) and it just didn’t sit right with me.  Pleasure travel is a fairly modern thing, and so I’d be surprised if we got such sayings from early centuries, asides from lofty aristocrats perhaps, who could afford to spend their lives on the move.  And so I started googling and have got as far as learning that the quotation is more likely to stem from this:

“The universe is a sort of book, whose first page one has read when one has seen only one’s own country.”

And now, having not read this either, I’m no more enlightened, but am heading off to find out whether it could be true, or if it’s from elsewhere.  [EDIT: I’ve now read suitable chunks of “Le Cosmopolite…” to know it is a fair representation, though he does follow it by cynically saying the other pages he read were just as bad!] But regardless of it’s source, is it true?

Well, I’m not sure.  Can one know the world and stay in your own little corner of it?

I think of one of our “international cafe” volunteers each week in Cork.  He comes from a rural Irish setting, lives at home with his parents and has never been outside of the country.  Yet his knowledge of world history, his outward lookingness and ability to engage with international students from round the world each week, is admirable.

I know other students who have been off travelling relentlessly and yet have not grown or learnt anything much consciously.  They’ve had amazing experiences, of course, but are left still none the wiser about the cultures they’ve visited.

But I could imagine that if one had a learning posture, one would not necessarily grow any more on the road, but just grow in different ways.  There’s something about full immersion in another culture that will surely always teach you more (or just faster?) in some areas than you could ever learn by reading about someone else’s experiences in a book or by living in one’s own culture surrounded by international people.  But that is not to say that travelling will teach you more in general.

Doubtless there’s so much to learn in life that one never needs to travel to keep learning.  And in the Christian life, one need not think that one is any more spiritual necessarily by having travelled.  In fact, it is some of the Godly old men and ladies in my life who have taught me soo much spiritually, who sit in their homes, bed-bound and pray, and pray and pray.  Their contentedness abounds.  Their pleasure lies in world to come.  Their joy has already started and reflects in their eyes.  Their questions about the Church in other lands shows great delight in those who can go and bring back tales.

Are you willing to learn and to be content? 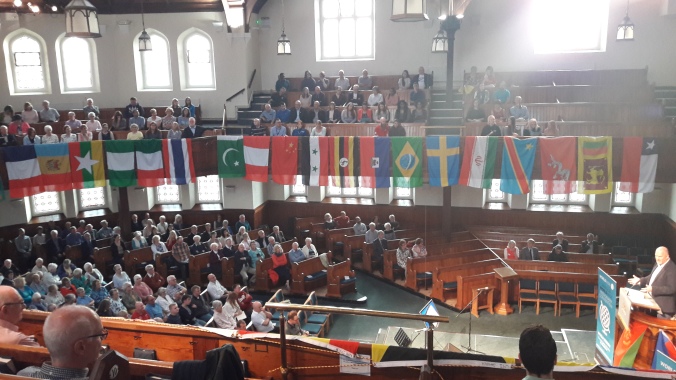 Bangor Worldwide Conference.  A chance to be outward looking from our own doorstep.  Talks from a Ugandan Archbishop and an Eritrean believer on one night.

One thought on “Augustine on travel…”