There’s nothing like making a few Donald Trump jokes.  That was the mood my house were in this morning.  A friend, staying over last night was quick to google search “Trump jokes” probably to lighten a fairly gloomy mood on a rainy, cold, winter’s morning in Ireland, when you’ve just learnt the news of the US elections.  But sadly googling that is exactly why I think most of us Europeans are no better than the mud-pie slinging Americans who are sitting in their polemical political camps, throwing things at each other from a distance.

This is a book review of “The Righteous Mind” by Jon 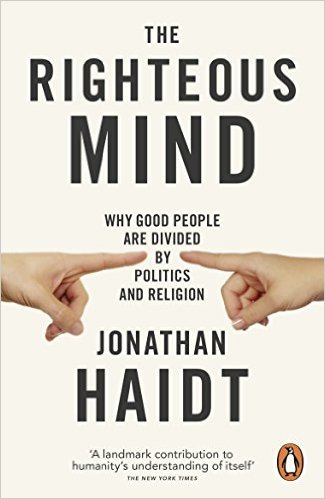 athan Haidt (Penguin books) which has been one of my top-reads in the last year (and for those of you who know how avidly I read, that says something!).  Jonathan is an academic social psychologist, but also an American Democrat.  But if that would put you off, please don’t let it – he writes purposely to describe how he thinks we can sit down side by side and talk constructively in the political and religious realm, instead of just talking past each other, and mis-understanding the “other” as just something from our nightmares.

He follows on from other recent works in social psychology (and perhaps goes back to agreeing with Aristotle and many before) to persuade us that we’re not so rational as humans as we’d like to think.  As an intuitionist about moral values, Haidt thinks that “the emotional dog wags the rational tail”.  His thoughts have been previously well drawn on in other works such as “Switch” (another must-read in my opinion, for those wanting to learn to bring about change in this world), but makes a convincing case, even if you haven’t read them.  (A video here to explain.)

Once he has convinced us of this, he then spends some time trying to look beyond our blind spots to see how conservative and liberal minds think morally.  Summed up in these two diagrams, this powerful analysis would help people at opposite ends of the political spectrum to not just throw mud-pies at each other, but to understand that there may be strong rationale why  people vote certain ways on certain issues, and how we can appeal to other voters and talk in terms that are meaningful to them. 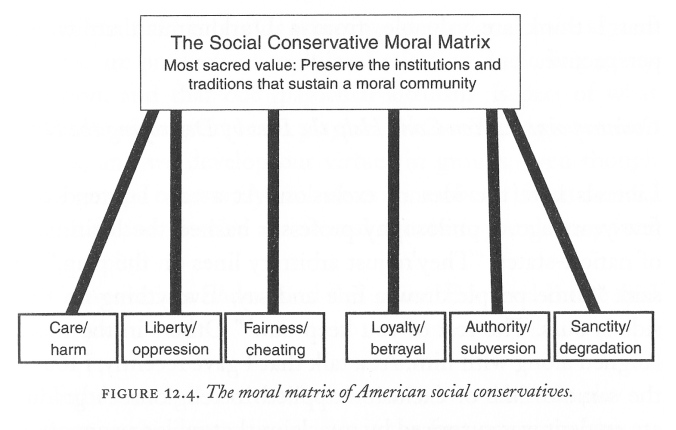 Once we understand these frameworks (for which he gives evidence in the book), and seem (intuitively!!) to me to be correct, we can start to talk.

Thirdly, Haidt goes on to argue for evolutionary group selection.  Given how much common populace reading (think Dawkins’ Selfish Gene and others) has derailed such concepts, it was eye-opening to me to see him advocating for such and suggesting that others will/do.  Perhaps I’m just behind on the academic thinking at the moment.  Through this, he tries to argue that anything that binds us together in social groupings could be for the advancement of society.  This would help an atheist to see the good of religion, as well as democrats to see and start to understand why having republican groupings might be good (and vice versa for both).

Finally he applies it concretely to life.  There are not those who are “good” and those who are “evil” as we so often like to pretend (we, or anyone who agrees with us, of course, are the good).  There is good and evil in everyone, and we must sit together and learn from each other.  Admittedly he says, it will be hard.  And if this election is anything to go by, the elephant has chosen the easy path, which is sitting in our camps yelling loudly.

Perhaps it’s the one fault of this book.  By it’s own theory (part 1), it will be virtually impossible to enact.  We are too emotionally driven to see its sense.  But for those who wish to see unity, I suggest this book is remarkable and well worth the read, particularly if you are a leader wanting to bring about change, or someone so frustrated with an “other” side of a political or religious grouping that you can’t fathom the attraction of it or how to bring about change.

(NB: for those concerned or persuaded that his group evolutionary thought may mean Christianity is a mere social construct, I can point you elsewhere.)

One thought on “Unity, post-election.”