The Aurora Borealis (Northern Lights) are what so many dream of, what travellers fly across the world to see, what photographers stay up all night to snap.  But what about the arctic circle at other times of year when it’s bright and sunny?

I’d never heard of it until we paid for my parent’s to go on a cruise to Norway for a once-in-a-lifetime gift.  But they came home mentioning the Midnight Sun – the summer solstice season where the sun is seen all night long, and there’s no darkness at all.

Soon after they came back, my sister and I were planning where to run a marathon, and looking around for the one that looked the best in Europe, saw this: The Midnight Sun Marathon 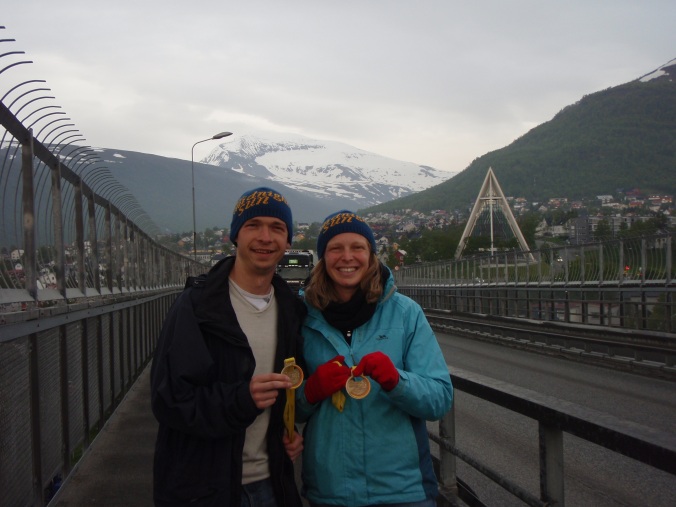 My sister and myself, standing on the famous Tromso bridge, with the stunning arctic scenery all around that kept us going through all the pain of the race!

Starting at 9pm, you run into the night, but even with a friend finishing after 2am, the skies were still blue and the sun was still shining!  An experience like no other.  So much so, that we avoided sitting around moaning about how sore we were the next morning, and immediately launched up into the highlands and islands of north Norway with a friend, camping and taking in some of the most stunning, untouched paradise I’ve seen (and I live in Ireland!).

Night-time out at Sommaroy island (though it got brighter than this at night), where you can just make out our tents on the green slopes, with crisp arctic waters beneath and snowy mountain caps beyond.

So here it is, the only reminder of the Midnight Sun that remains, along with photos and some of my fondest travelling memories I think I will ever have: 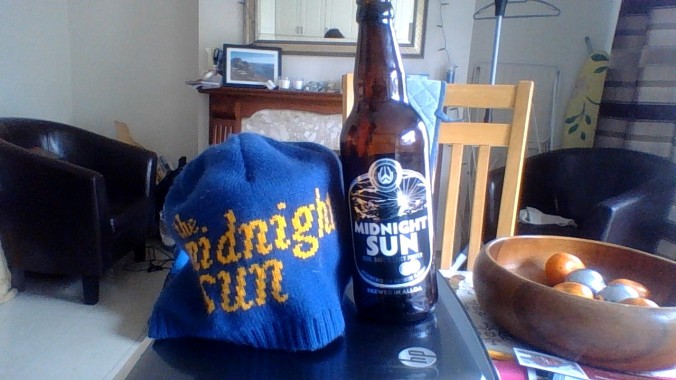 Don’t let the northern lights dazzle you into thinking they’re the only things worth seeing up in the arctic.  But be careful – 24 hours of daylight can make it hard to ever stop once you’re there!