Travelling always lends itself towards one night stands and quick flings.  I walked in to my room at a rural youth hostel recently to find the other two occupants of said room, lying on top of each other, and quite shocked that they had company in the hostel (thankfully not just me).  With my appearing, they disappeared….off to find a scene where they could make out undisturbed and, let’s face it, probably in a more romantic setting than a shabby hostel dorm.

But much as travelling lends itself to such encounters whilst thinking that your sex goes unseen and without harm on anyone, I doubt that many people go short-term travelling to find themselves a wife.  Perhaps move countries to where you deem the people to suit you better, yes, but not short term travels!  In fact, from those who’ve done so (Rob Lilwall I think being one), most don’t recommend the messiness of distance and culture at all!

And so here is where some ancient middle eastern stories fascinate me, where we find some quite unusual scenes and ones probably not repeatable (some more than others!).  And so I invite you to come with me on a well crawl, regardless of whether you consider yourself religious or not – I trust that these stories will be top proposal story material.  Well, well, well.  Sorry…

So here we are and we’re sitting by a well (Genesis chapter 24 and verses 1-67, for those who want to find the ancient story themselves).  Beside us is Isaac.  He’s travelled miles to find this dating spot.  It’s a divinely ordained dating spot at that!  (Perhaps that takes all the fun away, but it sure might be handy)  He didn’t fancy marrying any of the Canaanites, not because of their looks, but because of who they worshipped and followed in life.  They didn’t worship the living God.  So in order to be faithful, God directed him back to a spot and gave him the conditions by which he was to know what lady to marry.  Bit legalistic from God?  I’ll deal with that soon on the blog.  But anyway…on with the story.

A while and later, and boom!  There she was, offering the symbol that God had given – not just offering him a drink (unusual) but offering to water all his camels (a huge job!).  Talk of female power!  And back he goes to her place…et voila.

Come with me to the next well…

One generation later (we’re onto Genesis 29 for any interested) and we’re sitting by another well with some shepherds when along comes Jacob.  “How’s it going boy?”  “ah grand – have you seen my mother’s brother around in your hometown recently?”  “well, yes, and here comes his daughter”.  And so off goes Jacob back to Rachel’s place to meet his mother’s brother.  Voila!  Another well made match.

A well (in Israel)

And lest two of the central figures of Jewish history weren’t enough, we’ll add on a third well for the trip.  This time we’re sitting around and like so often happens, the women shepherds get hounded by their male counterparts.  This time it’s the Egyptians (of Exodus chapter 2).  They won’t let the Israelite women near the water troughs at the well.  But, wait, what’s this?  In storms the saviour of the day – Moses – to push them back and allow the women to access water for their needs.  The women arrive back early to their Father with their herds, he’s surprised and asks them why they’re early, and they tell of their great hero.  And you guessed it, it’s Moses married to one of this chap’s daughters.  Voila numero trois!

And I could go on…you see wells were pretty loaded locations in Israelite stories.  So when a well appears, you know a good proposal story is about to happen.  And that’s where we arrive at our final well in the eyewitness account of Jesus’ life in John chapter four.

Everyone sit on the edge of your seats!

Add on top of that history, the fact that men of that culture did not strike up conversation with women.  I mean, it just wasn’t done.  Go to the middle east and do that with a women, and well, erm, yes.  Now add to the fact that this women was of the opposite team.  It’s far worse than any Cork-Kerry rivalry.  It’s not even Ireland-England proportion.

And just to top it all off, Jesus is tired and travelling.  I mean, have you ever been on the road for a while?  When I’m travelling is normally when I get my head down, read a book or sleep.  And help the person who tries to have any meaningful chat with me!

And so the conversation starts – one-on-one.  “Can I have a drink?”

But (sadly, if you’re wanting some action!) all the controversy dies away when Jesus makes it clear what He’s after.  He could have launched in to criticise her and heap judgment on her like everyone else (for she’d had 5 husbands).  He could have made her feel really shameful.  It wouldn’t have taken much to do that.  But no, what does he say?  He can give eternally satisfying water.  He intrigues her.  This living water has been a theme throughout the prophets…everyone knew that!  (For those of you religiously orientated: Ezek 47:1-12; 43:1-12; Isa 44:3; Isaiah 55:1-3 ; Ezekiel 37:15-28 )

Even the best of wells couldn’t have done that (see – she remembers and mentioned those Israelite wells in the historical records of this story!).  “What do you mean?” she asks.

“Bring your husband and come back”

There it is – the same shame moment

Only…she doesn’t seem ashamed…she seems more excited about finding out about this water than she feels shame…because the conversation keeps going.  I don’t know about you, but I shut down convo pretty quickly when I feel shame or I babble on incessantly about something different and meaningless!

She’s amazed at what this prophet knows.  Likely in her culture, it’s five men who’ve treated her awfully in relationships and left her.  Women didn’t have much say in such things, yet still end up with a bad reputation from it.  “It’s normally their fault after all.” men might reason back then (and sadly too much today).

“But if this man is a prophet, he’s probably one of the wrong sort.” she thinks.  Imagine protestant vs Catholic.  “Oh yer one of them!  I mean to be Samaritan is to worship in your own place.  Not the Jerusalem temple like those Israelis.”  Or in terms, to be Irish is to go to mass.  Not a protestant church.  In fact, definitely not that kinda church.

But Jesus doesn’t take up the “them vs us” battle.  He rarely does.  He points past it to a day where everyone who worships in Spirit and Truth, will worship together at the same place.  It’s another thing the promised One would be said to do according to the prophets of old – everyone knew that – unite the nations – (Isa 49:6 ; 2:2-4; Gen 12)

And just when one bullet is dodged, the next happens…in walks his mates, to find him chatting one-on-one at a controversial location, in the tiredness of the heat with a saucy woman.

And just when one bullet is dodged, the next happens…in walks his mates, to find him chatting one-on-one at a controversial location, in the tiredness of the heat with a saucy woman.

But such is the purity and holiness of Jesus, that no-one asks any questions.  They all know nothing has happened.  (And perhaps that’s where it may differ to our situation in life)

Such love that goes far beyond gender boundaries.

Such love that goes far beyond cultural boundaries.

Such love that goes far beyond religious boundaries.

Such love that goes far beyond tiredness.

Such love that goes to the perceived most sinful.

Such love that helps her see her true state.

Such love that so intrigues and woos her heart spiritually, that her shame and conviction of sin are felt as nothing, compared to the all-surpassing grace that flows and points her to greater places to find joy.

On such offers of love, CS Lewis, the Irish Oxford professor, once said:

“It would seem that Our Lord find our desires not too strong, but too weak. We are half-hearted creatures, fooling about with drink and sex and ambition when infinite joy is offered us, like an ignorant child who wants to go on making mud pies in a slum because he cannot imagine what is meant by the offer of a holiday at the sea. We are far too easily pleased.” 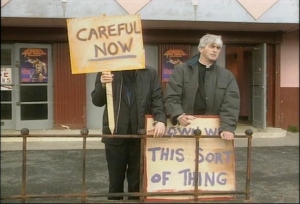 Such love that encourages us to not to hold signs saying “careful now” but “desire more” (in the right places, of course).

It’s not surprising then her response, is it? (to ecstatically tell others)

Or for that matter, those who gathered around to listen to Jesus’ words and went away changed by them?

And with that in mind, I might hope to wish the woman of my dreams on my travels (though I’m not holding out for it!).  But more so I hope to meet more of the travelling One who offers all-satisfying waters.  And perhaps those on the road with me will too, through my mouth and others.

This was an edited excerpt from a sermon I recently preached at several churches. in counties Waterford, Limerick and Cork.  Where does this fit into our theology of travel?  I’m not sure we can conclude huge amounts about travel from this.  Answers on a postcard and I’ll come back to it!